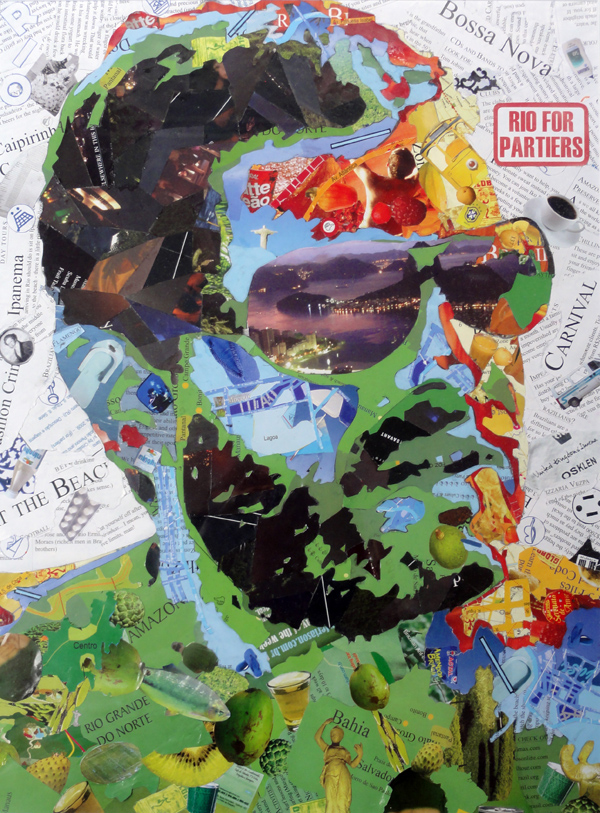 Cristiano, author of Rio For Partiers. Art by Leah Wilks

“It is a sin to compare places when travelling”, they teach us at tourism school.

True, but hard to avoid such a natural behavior. When I try hot-dogs anywhere in the world, I compare them to New York, Chicago or Vienna style. When I visit a palace, Versailles comes to mind as a reference point to bounce stats off: “This palace has 200 rooms!” “Well, Versailles has 300, so take that! I can’t help it. No one can. Sometimes I do manage to avoid comparisons and enjoy the place, thing, food or whatever for what it is, making my experience less frustrating and more appreciative, but that is rare, or whenever I have nothing to compare it with.

So, to contradict this golden rule, for the sake of making a point, I`ll put the idea of Brazil as a tourist destination on a comparative basis with other places in the world:

Brazil does not have the most pristine beaches (Tahiti does), the most flavorful dishes (France, Italy and Thailand do), historic landmarks (Rome, Beijing and Athens), Art museums (Berlin and NYC own this), bargain outlet malls (Florida), cutting edge architecture (Shanghai).
So why Rio?

What Brazil does very well, and I go as far as to say “better than anyone” is parties.

Brazilian festivals, whether cultural feasts or large parties, are second to none. If we follow the formula to making a great party that says “the more the merrier”, Brazil can easily put 2 million people at any event, with less than a week`s notice. Take the millennium celebration: 5 million on Copa beach. Any carnival in Rio or Salvador, in the recent years, has topped 6 million party goers on the streets, all 6 days. Rock in Rio, 2 million PAYING customers during one week.

The attitude of the party-goers can make or break a party, so “fun-loving” is the adjective attributed to most Brazilians. It will be rare to see a group of Brazilians behaving like diplomats at the Vienna Royal Ball. They`ll be the first to take off their tuxedos and take over the band, teaching them how to play a little samba.

Brazilian festivities have funds too. The carnival parade in Rio costs US$30 million for 2 days of show. 60 thousand dancers and every one dressed beautifully.

Brazil has music, an essential ingredient to any party. It has lots of it, in 32 distinct styles.

Event organizing is a big and profitable business in Brazil and the festival agenda doesn`t stop at carnival and New Year’s Eve. The same care and attention is given to the Parintins festival, in the Amazon, or Bumba-meu-boi festival in the North-east of Brazil. Then there is Festa Junina in June, all over Brazil, Oktober fest in the south, the Barretos country-rodeo in Sao Paulo. Like a Rolling Stone, a Brazilian`s social life catches no moss.

So, we have large numbers of fun participants, money, reasons to party and a well-balanced calendar. The last ingredient, and probably most important, is the fire in the heart. A desire to celebrate life, the here and now, the proximity of others. Whether or not this fire burns on alcohol or passion is neither here nor there. What matters is that Brazilians want to party. Where there is a wish, there is a way. And that desire to constantly celebrate something, anything, is what inspires Brazilian culture, and makes Brazil stand out as the most festive culture in the world.

Brazil is for partiers.